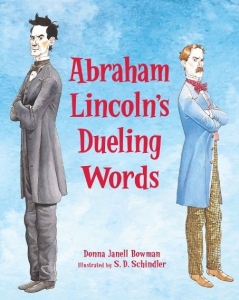 Long before he was our beloved president, Abraham Lincoln was known for his smarts and his knee-slapping humor. In 1842, that got him into a heap of trouble.
When he clashed with James Shields, a political rival, Lincoln came up with a rascally plan.
It was silly.
It was clever
And it was a great big mistake!
Shields challenged Lincoln to a duel!
Lincoln would need his wit and a healthy dose of humility to save his career—and maybe even his life!
A rare look at the more human side of Abraham Lincoln and how the lessons he learned made him a better man.

Welcome Donna! So, tell us …

What was the spark that ignited this book?

Oh, goodness, I think it sparked from the realization that Abraham Lincoln, the man I had always envisioned to be as polished as his posthumous memorials, was actually as flawed and human as the rest of us. It was a complete accident that, in 2011 or 2012, I stumbled upon a one-line mention of his duel while researching for another book. The realization of Lincoln’s foibles collided with my preconceived notions, which launched a new research journey. As I dug into biographies of Lincoln and the letters and documents that survive him, I began to admire how he overcame his foibles. Lincoln’s mean-spirited mistake landed him on the dueling ground. He ultimately had a choice to either allow his great big mistake to define him or to teach him. Obviously, he chose the latter.

As I always do before I begin writing, I searched for mentor texts—picture book biographies—that focus on a less-than-stellar side of a famous person. Needless to say, there were few. Initially, I was a bit nervous about shining a light on an event that Lincoln himself was ashamed of, until I read his law partner’s recollection that Lincoln complained that biographies magnified perfections and suppressed imperfections. In fact, Lincoln argued that they “commemorate a lie and cheat posterity out of the truth.” It felt like Lincoln himself was giving me his blessings to share his story.

The more global spark of the story for me lies in a lingering question that I hope all readers will consider after reading my book. What would have happened if the events of the duel had gone another way and Abraham Lincoln had never been president?

Tell us about how you sold this book. What was it like when you found out? Do you have an agent? Were there a lot of revisions along the way?

In 2012, I had a first draft of the Lincoln manuscript (then titled En Garde!). I showed it to my agent, Erin Murphy, then continued to revise for several months while simultaneously revising Step Right Up: How Doc and Jim Key Taught the World About Kindness for Lee and Low. Once my Lincoln manuscript shined, I snagged a critique with Peachtree editor Kathy Landwehr at the February 2013 Austin SCBWI conference. By conference time, she had already contacted my agent to express interest. Kathy was most impressed with my voice in the manuscript. As you can imagine, being complimented on voice—that most difficult craft element to cultivate—made me giddy. Soon, we were under contract.

We did go through more revisions to further finesse the voice and the direct-address narrator, and to simplify and streamline the complex historical aspects of the story. It was a joy to collaborate with an editor whose vision for the book so closely matched my own.

What surprising things did you research for this book?
Geez, so many things! Bloody Island, the gentleman’s code of conduct, 19th-century dueling procedures, the differences between swords and sabers, the financial panic of 1837, Andrew Jackson and his specie circular currency (which was VERY different). So much of what I researched doesn’t appear in my narrative, but I had to understand it all.

Tell us about your writing community. Are you in a critique group? Does a family member read your early drafts? Is Twitter your bastion of support?

I’m blessed to be part of the Austin creative community, which is populated by a large group of talented, supportive, and prolific authors and illustrators. Our SCBWI chapter is active and fueled by heart and a desire to produce quality works for young readers. It’s an inspiring group!

I have been in critique groups throughout my entire writing/publishing journey, but my regular critique partners have gotten as busy as I have, so we most often email or chat by phone when we need feedback. I rarely ask a family member to read my manuscripts, in part because they aren’t writers and can’t offer the kind of craft feedback I seek.

As for Twitter, I admit to being a bit of a doofus. I’m still trying to navigate my way through the Twitterverse.

What was it like watching the illustrations/cover come together?

Oh, my goodness, it is so exciting to see art for the first time and to watch it evolve through revision! In fact, I just received Adam Gustavson’s first sketches for my 2019 book King of the Tightrope and am reminded how I felt when I first saw S.D. Schindler’s art for Abraham Lincoln’s Dueling Words. With every turn of the PDF page, it was like opening another Christmas present. I am always fascinated by how illustrators add layers through their choice of images, colors, perspectives, symbolism, expressions, scene-setting. I’ve been lucky that my Peachtree editor has included me in the illustration process. Not all editors include the author, which can be especially problematic with nonfiction. 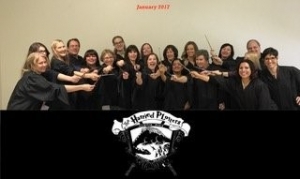 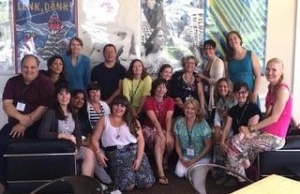 People often ask me why I chose to go to VCFA when I already had an agent and books published. Initially, I justified it as a way to enlarge my craft vocabulary, expand my writing interests, and acquire necessary credentials to teach. That was all true and the mission was accomplished, but it affected me in ways that I hadn’t expected. I gained new self-confidence in multiple genres, an incredible new family in my beloved classmates and the VCFA community at large, and broader credibility in general.

What was special about your VCFA graduating class?

Hold on while I get my family-sized box of tissues. The Harried Plotters are the most spectacular human beings that any girl could hope to link arms with. No matter our diverse backgrounds, our first day at VCFA made us equals. We bonded immediately and spent the next two very stressful years holding each other up during MLA-formatting crisis, essays, family deaths, essays, illnesses, essays, bouts of self-doubt, creative metamorphosis, exhaustion, critical thesis pressure, lecture rehearsals and cheering, wine pit laughter, tears of exhaustion, a book launch, tears of joy, hugs, random smiley messages—everything you could ask for from a family. I went enrolled in VCFA to earn three new letters, MFA, but I emerged with so much more!

Donna Janell Bowman is the author of many books for young readers, including the award-winning picture book biography Step Right Up: How Doc and Jim Key Taught the World About Kindness, illustrated by Daniel Minter (Lee and Low, October 2016) and Abraham Lincoln’s Dueling Words, illustrated by S.D. Schindler (Peachtree, April 1, 2018). In 2019, her book King of the Tightrope: The Great Blondin, illustrated by Adam Gustavson, releases from Peachtree Publishers. Donna has an MFA in Writing (WCYA) from Vermont College of Fine Arts and enjoys mentoring and teaching writers of all ages. She lives near Austin, Texas and is represented by Erin Murphy of the Erin Murphy Literary Agency. 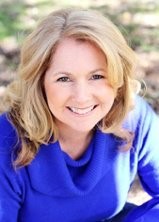 Sharon Darrow’s WORLDS WITHIN WORDS: WRITING AND THE WRITING LIFE

Varian Johnson and THE PARKER INHERITANCE
Scroll to top