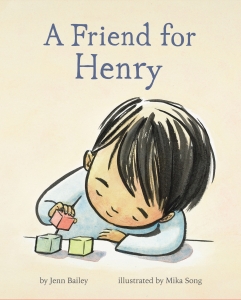 We are celebrating the release of VCFA grad Jenn Bailey’s new children’s book, A Friend for Henry.

“In Classroom Six, second left down the hall, Henry has been on the lookout for a friend. A friend who shares. A friend who listens. Maybe even a friend who likes things to stay the same and all in order, as Henry does. But on a day full of too close and too loud, when nothing seems to go right, will Henry ever find a friend—or will a friend find him? This heartfelt story from the perspective of a boy on the autism spectrum celebrates the everyday magic of friendship.”

Jenn, this story is incredibly insightful and warm. What was the spark that ignited it?

It came from watching my children navigate that worrisome world of friendship, particularly my middle son, who has Asperger’s syndrome. I knew how hard he was trying to connect, but most of his peers didn’t recognize those efforts. It was frustrating for him. So much was going on inside his mind as he tried to wade through all the rules and find the “right” way to communicate. I wanted to write a story that could mirror the processes behind the decisions he was making. If readers could share the experience, I hoped there’d be a bridge of understanding. Doing things differently doesn’t necessarily mean you are doing them wrong.

Can you tell us a bit about working with Illustrator Mika Song? What was the illustration process like for you?

I’ve not met Mika IRL (in real life) but we’ve chatted on email. I was very lucky that my publisher Chronicle Books let me be part of the process. When they started looking for an illustrator they asked me what kind of illustrative style I had envisioned for the book. I shared some art that I liked and when they found Mika her portfolio was even better than I had imagined. She conveys so much in a subtle expression. When I saw the first sketches of Henry I fell in love. Mika took everything I was trying to say and enhanced it with her own deep understanding. There is a spread where Henry and Katie are first becoming friends while talking about Gilly, the class fish. The way Mika portrayed this happening, through the fishbowl, through this watery, somewhat refractive lens, is both powerful and perceptive. I’ve always felt a picture book author tells only half the story. I am beyond grateful someone as talented as Mika came along to tell the other half.

It sounds like a perfect relationship. Can you tell us about how you sold this book in the first place?

That is a story. And at one point it involves me driving through downtown traffic while my writing partners blow up my phone and yell at me to read my expletive email. But I’ll tell you the short version.

I signed up for a webinar that included a critique by an editor at Chronicle Books. I’ve always loved Chronicle because they seem to understand quirky books and those are the types of books I tend to write. When the critique came back there weren’t really any comments on it except, “I love this.” And there was a business card from Daria Harper.

I emailed her, telling her I’d like to submit the story for real and asking who I should send it to. My critique was supposed to be with a different editor, and I didn’t want to ruffle feathers. Daria got back to me an hour later, asking that the manuscript go directly to her.

We exchanged some emails, I did some light revisions, and then silence. You know that silence. I was fairly convinced I’d be marking this one down as another “Almost.”

A few months later and twenty minutes before I was to give my graduate lecture at VCFA I decided to try and distract myself by checking email. There was a message from Daria. The subject line said, “Great News about HENRY!” The lecture went well too. It was a good day! 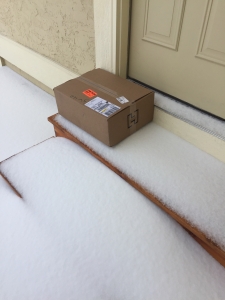 I remember that lecture! It was fabulous. I can’t imagine how you held all of that excitement together without exploding. It sounds as though you sold this book to Daria directly. Do you have an agent?

I had an agent before I went to VCFA, but we broke up. It was actually over this book. She wanted me to drastically change the project or drop it entirely. I didn’t want to do either.

When Chronicle made me the offer, I contacted three agents from the very top of my wish list. Two of them got back to me right away with requests to see more of my work. This was very encouraging. I didn’t want an agent for a project, I wanted one for my career. I am thrilled to be represented by Rosemary Stimola of the Stimola Literary Studio.

On the subject of VCFA, how did attending the MFA WCYA affect your writing life?

It gave me VCFA. Those “rights and privileges” our diplomas talk about? Those are powerful things. I have the right to say I earned this. I have the privilege of being considered a peer among the best writers that ever were. At VCFA I found my tribe and I found my voice and I learned my craft. Best decision I ever made.

What are your favorite VCFA memories?

The traditions. I love them all – the class names, the staff introductions, the Best Kept Secret every graduation, the Delirium. But my most favorite memories are the times I shared with my beloved Harried Plotters. Everyone may think their class was the best, but I know mine was.

Don’t go in with a preconceived idea of what you will be writing. That cuts you off from all the wonderful possibilities of what you could be writing. Go to VCFA as a sponge. Absorb. Take it all in. Try everything. Listen. VCFA is a chance to experiment, be inquisitive, and wonder. You haven’t been able to do that since you were three-years old.

Willfulness. I will put my butt in the chair. I will find the right words. And I will write the book I want to write. Eventually.

Tell us about something special you keep on your desk as you work.

I have two things. One is a rock that Arthur Levine signed for me. It says “Hard” because sometimes, ain’t it just? The other is a wee tin sign that hangs on one of those banana hangers. I varnished a Terry Pratchett quote to it. It reads, “If you trust in yourself…and believe in your dreams…and follow your star…you’ll still get beaten by people who spent their time working hard and learning things and weren’t so lazy.”

A great reminder about the power of discipline. Thanks so much for sharing a bit about your writing process, your experience at VCFA and how A Friend for Henry came into the world!

Jenn Bailey is an author, editor, blue-ribbon pie baker, and eager traveler. She lives in Leawood, Kansas with her supportive family, her smelly dogs, and her bored cats. This is her first picture book. She is a VCFA Harried Plotter; January 2017

A FRIEND FOR HENRY is published by Chronicle Books. February 26, 2019

Amanda West Lewis combines careers as a writer, theatre artist and calligrapher. Her eight books for children and youth range from non-fiction books to historical novels. September 17: A Novel was nominated for the Silver Birch Award, the Red Cedar Award, and the Violet Downey IODE Award. The Pact was listed as a 2017 USBBY Outstanding International book. Amanda has a particular interest in creating historically relevant stories for young people and is currently working on a new novel about youth activism in 1968. She is the founder of The Ottawa Children’s Theatre, a company dedicated to drama education for children aged 3 – 17. Amanda has an MFA in Writing for Children and Young Adults from VCFA and is a proud member of The Dead Post-Its. 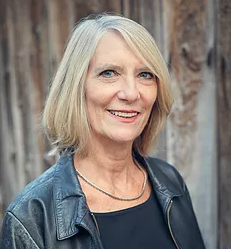