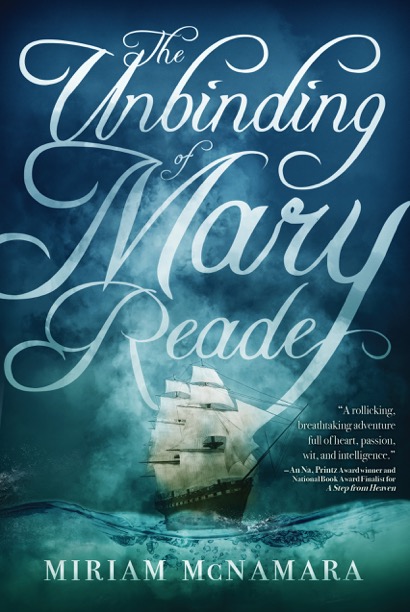 Today we celebrate Miriam McNamara ‘12 and her debut YA novel, The Unbinding of Mary Reade!

A clever, romantic novel based on the true story of a girl who disguised herself as a boy to sail with the infamous pirates Anne Bonny and Calico Jack–and fell in love with Anne Bonny.

There’s no place for a girl in Mary’s world. Not in the home of her mum, desperately drunk and poor. Not in the household of her wealthy granny, where no girl can be named an heir. And certainly not in the arms of Nat, her childhood love who never knew her for who she was. As a sailor aboard a Caribbean merchant ship, Mary’s livelihood–and her safety–depends on her ability to disguise her gender.

At least, that’s what she thinks is true. But then pirates attack the ship, and in the midst of the gang of cutthroats, Mary spots something she never could have imagined: a girl pirate.

The sight of a girl standing unafraid upon the deck, gun and sword in hand, changes everything. In a split-second decision, Mary turns her gun on her own captain, earning herself the chance to join the account and become a pirate alongside Calico Jack and Anne Bonny.

For the first time, Mary has a shot at freedom. But imagining living as her true self is easier, it seems, than actually doing it. And when Mary finds herself falling for the captain’s mistress, she risks everything–her childhood love, her place among the crew, and even her life.

Breathlessly romantic and brilliantly subversive, The Unbinding of Mary Reade is sure to sweep readers off their feet and make their hearts soar.

The Unbinding of Mary Reade comes out June 19th, 2018, from Sky Pony Press. Welcome, Miriam! Please tell us, what was the spark that ignited this book?

When I was in undergrad I wrote a paper for a history class arguing that individuals who were oppressed in mainstream society—people of color and women, namely—sometimes found some kind of equality within the democratic structure of pirate ships. During my research, I fell in love with Mary Read and Anne Bonny. Their alleged romance and piratical ways made my imagination run wild. Years later, when I decided that I wanted to write a novel, I knew instantly that I wanted it to be about them.

So Mary is based on a real historical figure? (There were more than a few female pirates running around!)

Yes! She’s based on the real-life Mary Read, who sailed with Calico Jack near the end of the Golden Age of Piracy. However, I chose not to adhere too closely with the widely accepted version of her life, which was recorded in A General History of the Robberies and Murders of the Most Notorious Pirates, published under the name Captain Charles Johnson in 1724. Although I know some people will question this choice, A General History is notoriously inaccurate source material published under an alias (many say Daniel Defoe wrote the book, but most experts believe this theory to be false), so I decided not to take it as truth as so many people do. I think of A General History’s account as a sort of legend or fairytale about the real-life Mary Read, and I decided to do a retelling of that story putting the elements that originally drew me to her life front-and-center—namely, Mary’s complicated relationship with gender, sexuality, and culture during a fascinating time in history.

Pirates have always been a fascinating topic for fiction. What do you think draws readers to these ne’er-do-wells?

I know that for me, especially as a young person feeling rebellious and misunderstood and disillusioned with mainstream culture, I found pirates to be so fascinating. Here is this group of people who at first glance are villains, but when you put them into context—when you learn about the culture that these outlaw communities sprang from—you realize that they are not the black-and-white bad guys that they seem. In the 1700s, pirates were doing exactly what everyone else was doing—raiding ships, stealing what wasn’t theirs—only without a state to sanction them, and using what was a much more democratic system to run their ships and divvy up their spoils. Even with today’s pirates, when you realize the extreme circumstances they come from, given almost no options for subsistence or even survival, it makes more sense that they would resort to desperate measures. I am not saying that all pirates are misunderstood heart-of-gold antiheroes, but they beg for context and deeper understanding—just like we all do in order to be fully understood.

Who was your favorite character to write and why?

I love all of them so much! There’s Mary, of course. Captain Jack with his flamboyant manner

and complicated feelings about piracy. Bill the quartermaster, with his iron will and common sense. Paddy, Mary’s fretful sidekick when she joins the pirates. Nat, her handsome and conflicted childhood love. Buuuuuut of course if I have to pick a favorite, I have to pick Anne! She uses the patriarchal systems in her world because she’s learned to work them and it’s all she’s ever known—but she also hates her powerlessness and longs to rebel. She’s cunning and vulnerable and furious and exuberant and broken and tender. I fall in love with her right along with Mary every time.

Tell us about the title of the book. Was it always this title? Was there any back-and-forth?

Titles are one of the hardest things for me to nail down! The book was drafted and had undergone a few revisions and I still didn’t have a title, when suddenly it came to me all at once. A big part of Mary’s disguise is this binding that her mum put her in as she developed into a teenager in order to hide her true identity, and Mary’s battle with feeling seen for who she really is and comfortable in her identity is wrapped up, quite literally, in this binding. Throughout the story it serves as a perfect metaphor for her emotional journey. Once the title came to me—and after I ran it by my VCFA classmates and got resounding affirmation—I knew I’d gotten it right.

What was the most difficult element to cut/change during the revision process and why?

Structure was the last element of this story that came together. Originally I began the story when Mary’s ship is attacked by pirates and she decides to join their crew, but her character is so complicated—she isn’t just a girl-disguises-self-as-boy-to-join-the-crew protagonist—that I couldn’t squeeze the character development the story needed into backstory. I found myself needing to go back in time and begin the narrative earlier. Once I did my character finally worked—but then the plot didn’t! The pacing dragged during the first third of the book no matter how I cut and rearranged. The aha moment came while I was on submission, when an editor asked for an R&R with a nonlinear narrative, splicing the first third of the story into the rest of the story. Revision magic happened! The interplay between the two timelines worked so well, added layers of depth to the main storyline, and the pacing worked. I got my first offer for Mary after that revision, as well as the offer that gave Mary a home.

If someone reads and loves The Unbinding of Mary Reade, what book(s) would you recommend they read next?

One of my favorite disguised-girl pirate YA novels is Bloody Jack by L.A. Meyer. For another romantic LGBTQ YA historical adventure, try A Gentleman’s Guide to Vice and Virtue by Mackenzie Lee. For excellent queer historical fiction that inspired my novel (although it isn’t young adult), try Tipping the Velvet and Fingersmith by Sara Waters.

Martine Leavitt, Julie Larios, Susan Fletcher, and Rita Williams-Garcia. I owe all of them an eternal debt of gratitude, and Martine, Susan, and Rita in particular left their mark on Mary’s story in all of the best ways.

I had an innate sense of story and character from being a lifelong devourer of fiction, and I’d always been a “good” writer, getting high grades for my writing in school and that sort of thing—but once I started writing fiction seriously, I knew I needed help in order to write the stories I wanted to tell. I took a local writing class with an editor, who saw the spark of something in my pages and suggested I apply to VCFA.

I left the program with most of a book and the skills to finish it on my own—and write another, and then another. My advisors and the lectures and workshops at VCFA filled my toolbox to brimming with the skills I needed, but the most meaningful thing I got from attending VCFA is a writing community. It gives me the strength, comradery, and resources to keep writing.

What’s special about the VCFA-WCYA program?

The community! I love you guys, and I feel loved in return. Once I was done with my MFA, I finished Mary’s story and wrote another novel while meeting weekly with three other writers from the program. I’ve attended alumni events and novel writing workshops that have given me jolts of inspiration and energy to feed my work. I still email with my advisors. I am part of social media communities that sprang from VCFA and interact with them regularly. VCFA alums are always my best beta-readers and cheerleaders. 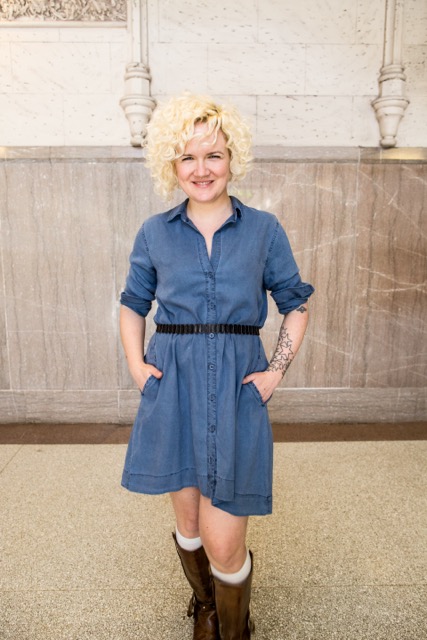 Miriam McNamara earned a Master of Fine Arts in Writing for Children and Young Adults from the Vermont College of Fine Arts, where she won the Norma Fox Mazer award for a historical young adult manuscript work-in-progress. The Unbinding of Mary Reade is her first novel. She lives in Minneapolis, Minnesota, but she also calls Asheville, North Carolina home.

Author and Literacy Advocate Penny Kittle to Appear as Guest at July 2018 R...
Scroll to top