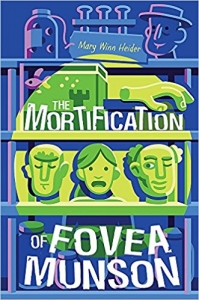 Mary Winn Heider put her real-life experience working in a cadaver lab to work in her new book, The Mortification of Fovea Munson!

Mary is a 2012 graduate of WYCA and is currently living in Chicago. She is an ensemble member with the theater company Barrel of Monkeys  so it’s no surprise this book is full of good humor and pure comedy. In addition to writing and performing, she teaches creative writing to 3rd-5th graders in public schools all over the city.

ABOUT THE MORTIFICATION OF FOVEA MUNSON:

Fovea Munson is nobody’s Igor. True, her parents own a cadaver lab where they perform surgeries on dead bodies. And yes, that makes her gross by association, at least according to everyone in seventh grade. And sure, Fovea’s stuck working at the lab now that her summer camp plans have fallen through. But she is by no means Dr. Frankenstein’s snuffling assistant!

That is, until three disembodied heads, left to thaw in the wet lab, start talking. To her. Out loud.

What seems like a nightmare, or bizarre hallucination, is not. Fovea is somebody’s Igor, all right. Three somebodies, actually. And they need a favor.

With a madcap sense of humor and a lot of heart (not to mention other body parts), this is a story about finding oneself, finding one’s friends, and embracing the moment.

Fovea, whose name means “eyeballs” in “medical lingo,” would rather spend the summer at “a chewed-gum landfill” or in “a yurt in Siberia” than set foot in the lab. However, the 12-year-old’s eternally cheerful, medical-wordplay–loving parents have other ideas: Fovea can replace their former receptionist for the summer. All Fovea has to do is clean up after lunch, keep out wily medical-device salespeople, and take delivery of body parts (bull urethras, anyone?). As long as she stays out of the lab, she’ll be fine. Right? Alone one afternoon, Fovea hears voices coming from the lab. When she investigates, she gets the shock of her very short life: heads talking to one another. As in medical specimens without bodies, defrosting on a table, and they need a favor. Shenanigans ensue as Fovea dodges a blackmailing cremator, searches for a missing biohazard, attempts to win back her former best friend, and hides her escapades from her parents and her Henry VIII–admiring Filipina grandmother. Fovea’s wry first-person narration (“I miss the good old days where I fell off horses all summer”) anchors the hilariously unbelievable action. Mixed-race Fovea’s non-Filipino heritage is unspecified, implying a white default.

Sure to tickle the most fickle funny bone. (Fantasy. 8-13)