Seventeen-year-old Mana has found and rescued her mother, but her work isn’t done yet. Her mother may be out of alien hands, but she’s in a coma, unable to tell anyone what she knows.

Mana is ready to take action. The only problem? Nobody will let her. Lyle, her best friend and almost-boyfriend (for a minute there, anyway), seems to want nothing to do with hunting aliens, despite his love of Doctor Who. Bestie Seppie is so desperate to stay out of it, she’s actually leaving town. And her mom’s hot but arrogant alien-hunting partner, China, is ignoring Mana’s texts, cutting her out of the mission entirely.

They all know the alien threat won’t stay quiet for long. It’s up to Mana to fight her way back in. 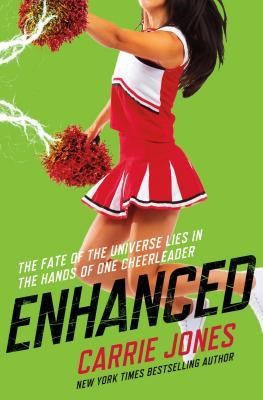 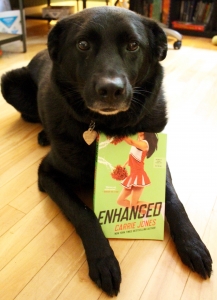 Hello. This is Spartacus, Carrie’s dog of awesome bacon-loving happiness. In exchange for scratching the top of my tail, I have agreed to interview the human once again for the Launch Pad, which is basically the only place that would put up with this sort of dog-loving shenanigans.

Yes. I can still type. Don’t worry about that today. Let’s just say that some dogs are magic and I am one of those dogs.

Spartacus: Let’s start with the most important question. There is a dog in this book, am I right?

Spartacus: Good! This means you can continue to be my human.

Carrie: I know. You threatened me about not being your human if I didn’t give a dog a significant role in this book series. So I did.

Spartacus: I have trained you well. 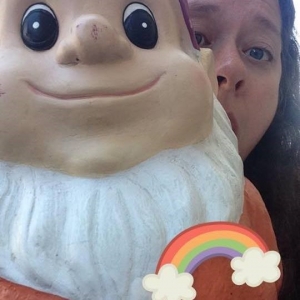 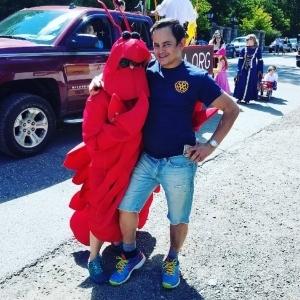 Spartacus: That is because you are a human and not a dog and have a different set of moral codes and ideals to aspire to. Believe me. It’s a compliment. So, back to the interview. Who was your favorite character to write and why?

Spartacus: You don’t have to say that.

Carrie: I kind of feel I do.

Spartacus: And why was the dog your favorite?

Carrie: Well, other than the fact that it is A DOG, it also made me nostalgic for fifth-grade Carrie who won multiple author of the month contests with a serialized story about a girl who joins the Army, finds an alien/dog named ABBA that she falls in love with and they save the world while singing a lot of 1980s songs.

Spartacus: You haven’t really evolved much since then, have you?

Carrie: As a writer or as a human? No. Probably not. I still like unicorns, too.

Spartacus: Hold on. I need some therapy. Bring me some bacon. . . . Thank you. So what was the spark that ignited this book?

Carrie: I was a volunteer firefighter and a restaurant burnt down in our small town.

Spartacus: The Portside Grill? I LOVED walking by that restaurant. They cooked a lot of meat. It smelled delicious.

Carrie: Yes! That one. So, um…. when I was looking at the flames, I thought I saw something hovering above the restaurant, something unidentified. It was really pretty hot and I was super dehydrated at the time so I was probably hallucinating. Maybe. Yeah. But if you readEnhanced, you’ll totally recognize this in one of the scenes.

Spartacus: HUMAN! I WORRY ABOUT YOU!

Carrie: I know… buddy. I know. 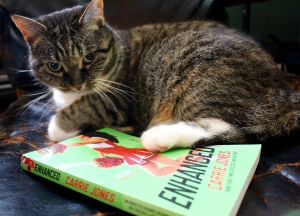 Thanks for stopping by, Carrie Jones and Spartacus! We wish you tail wags and extra bacon as Enhanced blasts off into the galaxy!

Carrie Jones is the New York Times and internationally bestselling author of the Need series, Time Stoppers series for middle grade readers, Flying series, as well as After Obsession with Steven E. Wedel. She is also the co-editor of the teen anthology, Dear Bully. A distinguished alum of Vermont College’s MFA Program, Carrie is a volunteer firefighter in Maine because … um… firefighting!  In her spare time, she likes to pet dogs, fight polio with Rotary International, and make children’s literacy festivals.