A wide-eyed child looks out at the world with curiosity and pleasure, finding it endlessly surprising. But there is mystery too, as in the puzzling pictures he sees, made up of elusive lines and squiggles. When Pedro starts school, his great curiosity grows even greater with each letter he learns. Suddenly his world is changing, as the lines and squiggles become letters and words. 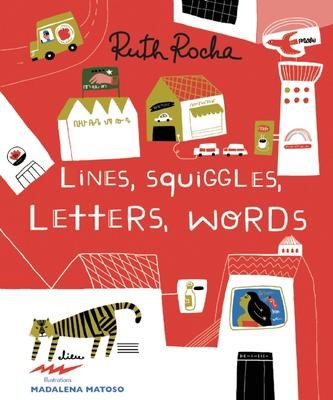 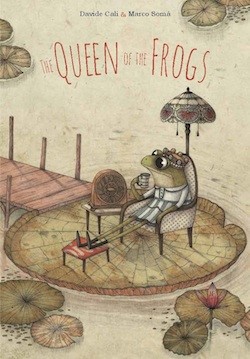 The Queen of the Frogs by Davide Cali, illustrated by Marco Somà, translated from Portuguese by Lyn Miller-Lachmann (Eerdmans Books for Young Readers).

When a mysterious crown falls into a pond, the little frog who finds it is instantly pronounced the queen. But when her royal subjects start to question her authority, she must prove she’s fit to rule — if she can.

Three Balls of Wool (Can Change the World) by Henriqueta Cristina, illustrated by Yara Kono, translated from Portuguese by Lyn Miller-Lachmann (Enchanted Lion).

A family escapes the dictatorship in Portugal in the late 1960s, seeking freedom and a better life. Their journey takes them to Communist Czechoslovakia, where “all children go to school.” But while the children go to school, people don’t have freedom of choice or the right to speak their minds. Refusing to accept a life without freedom, the mother gets to work, turning a bleak reality inside out and upside down. In the end, these refugees spark a movement for change in their community. 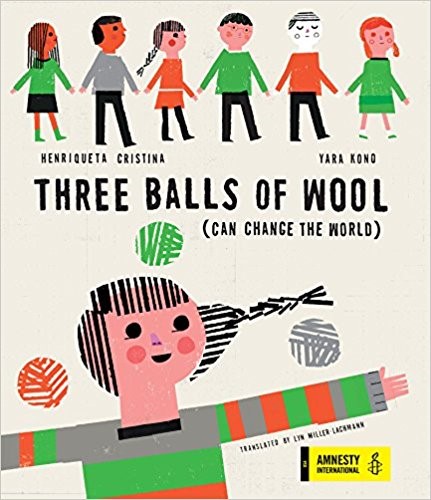 Welcome, Lyn! How do you approach translation? What differences are there between translation and writing?

With translation, I’m responsible for the words in English, but not the characters, plot, and other story elements. As a result, I can focus exclusively on the language, trying to capture the voice and intent of the original author while making the work accessible and appealing to English-language readers.

You translate books from both Portuguese and Spanish. When did you learn these languages? Is there any difference between your approach to a Portuguese book and a Spanish book?

I learned Spanish in middle and high school and had the opportunity to live in various Spanish-speaking countries. When I was in library school in the late 1980s, I took classes and served an internship as a bilingual children’s librarian. I currently live in a neighborhood in New York City where Spanish is spoken almost as much as English.

Being fluent in Spanish helped me to learn Portuguese more quickly when my husband and I moved to Lisbon for six months after I graduated from VCFA in July 2012. While I was there, I took a class in Portuguese for immigrants. Since then, we’ve spent around two months of each year in Portugal so I can refresh my language skills and acquire new books to read and translate.

Does translating a book bring you into a relationship with the author?

Most of the time translators don’t meet the author. For instance, when my own novel Gringolandia was translated into Italian, I never met the translator. However, of the five books I’ve translated from Portuguese, I’ve met the author of two – Isabel Minhós Martins (The World in a Second) and Henriqueta Cristina (Three Balls of Wool). In June 2016 I traveled to Coimbra with my VCFA classmate and friend Sandra Nickel to meet Kuki, as Henriqueta is known to her friends, and we were treated to an inside tour of the UNESCO Heritage Site led by her husband, a professor of civil engineering at the University of Coimbra who directed the restoration. You can read about our trip here:http://www.lynmillerlachmann.com/what-to-do-when-your-column-cracks-and-other-thoughts-on-restoration/

For the most part, publishers approach me. Enchanted Lion Books has a relationship with the Portuguese publisher Planeta Tangerina, and several of the books I’ve worked on come from this innovative small press located outside Lisbon. Other books have come through agents who specialize in marketing international books. I’ve brought proposals for books in both Portuguese and Spanish to editors who I work with, but so far, none of the proposals has led to a contract. I’m still trying, though.

I do have an agent, but she handles the books I write myself, not ones I translate. All of my translation work has come from editors I know or via references from editors with whom I’ve worked. Most translators I know aren’t represented by agents.

What was the editorial process? Did it differ from the author/editor relationship? Were there a lot of revisions?

The editorial process can be as involved as an author/editor relationship, especially if the editor wants to “Americanize” or otherwise change a text. Portuguese is a wordy language, and most of my translations have resulted in a text that’s about a third shorter than the original. I will say that my editor at Enchanted Lion likes crisp prose, and we’ve made more changes in the course of translation, than my editor at Eerdmans, who wanted to keep the flowery language of the original. 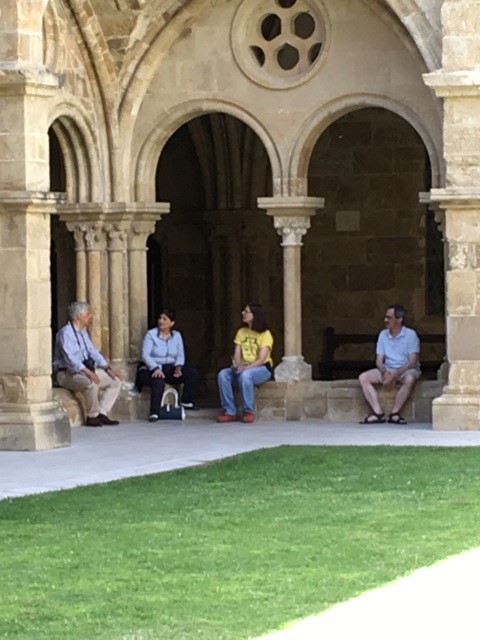 One of your books has been published as part of an endorsement from Amnesty International. What is it like to work with a nonprofit organization on a book of social significance? Are there differences from “regular” publishing? Is your personal focus primarily on work of political or social relevance?

I am honored to have translated Three Balls of Wool (Can Change the World), a book about a refugee family from Portugal in the 1960s that connects so much with the present day. Amnesty International was particularly interested in this book because the organization’s founder became involved in the cause of human rights when he learned of several students at the University of Coimbra who had been jailed in 1961 for protesting the dictatorship.

Amnesty International signed on after I’d already translated the book. They contributed a preface and the International Declaration of Human Rights at the end. Now that the book is out, I’ll be working with them on a teachers guide and school events.

Three Balls of Wool touches on many of the themes of my own writing. My debut YA novel, Gringolandia, portrays a refugee family from the Pinochet dictatorship in Chile. When Claudia Bedrick at Enchanted Lion asked me to translateThree Balls of Wool, I was in the middle of writing my own YA novel set in Portugal in 1966, about a teenager who follows a popular fado singer and her own younger brother into an underground resistance movement against the Salazar regime.

Who were your advisors at VCFA?
An Na, Jane Kurtz, Sarah Ellis, Coe Booth, Shelley Tanaka. I did a PG semester with Shelley that focused on translation.

Working on the packets every month made me more disciplined, and I learned to read like a writer, using the books I read as mentor texts. I do that with translations as well, particularly looking at how the translator deals with cultural differences that English-language readers may have difficulty bridging.

Thank you for stopping by, Lyn!

Visit her online at www.lynmillerlachmann.com.