After Rogan Webber levels up yet again on his favorite video game, Laser Viper, the world-famous creator of the game invites him to join the five best players in the country for an exclusive tournament. The gamers are flown to the tech mogul’s headquarters, where they stay in luxury dorms and test out cutting edge virtual-reality gaming equipment, doing digital battle as powerful fighting robots. It’s the ultimate gaming experience.

But as the contest continues, the missions become harder, losing gamers are eliminated, and the remaining contestants face the growing suspicion that the game may not be what it seems. Why do the soldiers and robots they fight in Laser Viper act so weird? What’s behind the strange game glitches? And why does the game feel so…real?

Rogan and his gamer rivals must come together, summoning the collective power of their Gamer Army to discover the truth and make things right, in a dangerous world where video games have invaded reality. 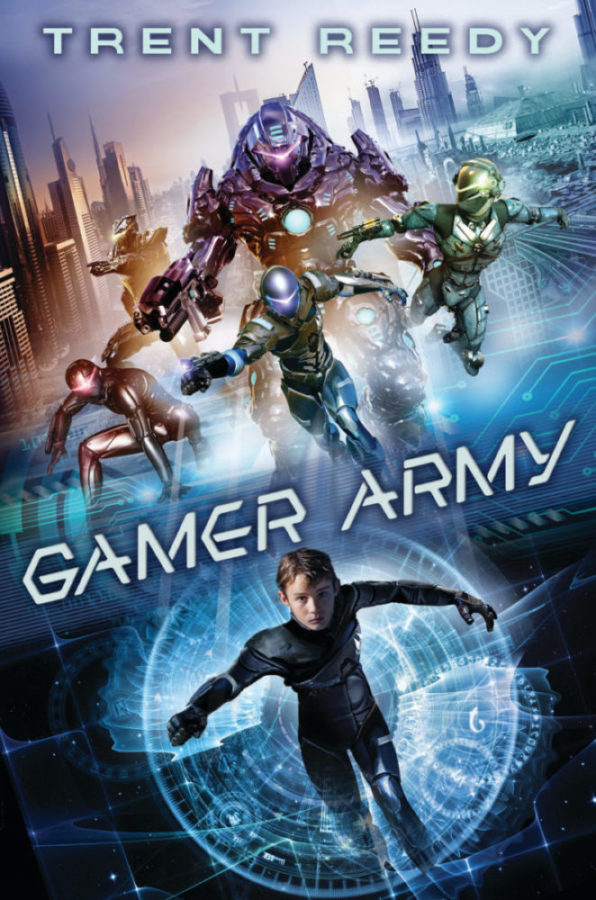 Welcome, Trent! In Gamer Army, Rogan’s motto is “Ego sum maximus,” which means “I am the greatest.” If you had a motto, what would it be?

This is one of the toughest questions I’ve ever had to answer. I think this is because I lack, or have long since stopped feigning the kind of confidence that the book’s protagonist Rogan experiences or is feigning. “I do the best I can” doesn’t make for such a catchy motto. I think, were I forced to choose a motto, mine would be: “For the Love of Books.” I think that sums up a lot of what I am about.

Were there any tricky scenes that were difficult to write? What helped you finally get them down?

Gamer Army was especially tricky to write overall. It is my seventh novel, and it holds the distinction of starting out as the absolute worst first version. The manuscript I first sent to my editor was shockingly remarkably terrible. All first drafts have many problems, and many, including mine are often quite bad. But the first version of Gamer Army was a nightmare.

All the video game aspects were nothing like real modern or likely future video games. The action concerned players operating flying drones with eight small rotary-blade propellers. I wasted an incredible amount of time designing instructions for small illustrations meant to show the same display the game players were watching. Inserting these image instruction squares amid the right section of text was very difficult. The original version included two or three chapters of the gamers training on certain game rounds. These were fun, but nothing was at stake during training. I had even included a chapter which asked my readers to believe the kids had consented to brain surgery in order to be more effectively wired into the video game.

I am saving this terrible version for laughs and as a reminder that even terrible manuscripts can be salvaged.

I opened a new word file and rewrote the entire novel from the ground up, making incredibly significant changes to plot, character, setting, and structure. It was the most significant revision in which I have ever engaged. I absolutely love the result. After that rewrite the novel came together very quickly, and I had a great time working on the book. Of my seven novels Gamer Army was the most fun to re-write and revise. After I tossed out that clunky first version, everything went great.

Did you do research to get the gaming mechanics right? Play any specific video games? Do you have any favorite video games that inspired the book?

I did do a lot of research through the process of writing Gamer Army. After I handed in that first dreadful version of Gamer Army, my editor asked for my biggest concerns about the book. When she started the conversation like that, I knew the book was in big trouble. “I worry that this book reads less like a 12-year-old gamer,” I said, “and more like a 38-year-old dude whose most recent video game system was the Super Nintendo in 1996.” “Yes,” she said. “You must go buy yourself a game system.”

That’s exactly what I did. I walked into GameStop completely clueless, explaining my problem to the guy there. Did I want an Xbox or PS4? “I want to play this thing I’ve seen called Halo,” I said. “I think that might be similar to the game I’m trying to write about.” Xbox it was, then. I played Halo, Call of Duty, and some other games, finding them extremely confusing at first. But I improved a little. I have limited data internet where I live so I took my Xbox to a friend’s house so I could play Halo online with some of my former students.

Later, I read about virtual reality and wanted to give that a try. After all, writing about today’s video games would mean that, by publication time or not long after, my book would be about yesterday’s games. I wanted to ride technology into the future. A friend and I pooled our resources to purchase the expensive and somewhat clunky Oculus Rift virtual reality system. When I had a chance to play some games with this system, I was completely amazed. Virtual reality is the future. It’s going to change our society on an even more profound level than the introduction of the internet. After playing this, I asked my publisher for more time for revision and took Gamer Army back into the shop for another major overhaul. I think the virtual reality element adds a lot more depth and complexity to the story. Blurring the line between virtual and actual reality put the characters in some tough positions and let them do some amazing things.

The research for Gamer Army was definitely some of the most fun “work” I’ve ever done for a book.

If someone reads and loves Gamer Army, what book(s) would you recommend for them to read next?

I have another middle grade novel in which twelve-year-old kids enjoy great adventure. My second novel Stealing Air is probably my least well known book, but I love it. It’s great fun. Three six grade boys work together in a secret workshop to build an perfect an experimental aircraft. I think it has that same—Here we go!—sense of adventure that comes out in Gamer Army.

Who were your advisors at VCFA’s Writing for Children and Young Adults program?

I had a great time working with Rita Williams-Garcia, Jane Kurtz, David Gifaldi, and Margaret Bechard.

Wow. It would be easier to explain the very few teeny-tiny ways VC did not affect my writing life. The change in me and my writing through my experiences with VC were profound.

I think about story differently, and this has ruined some books and TV shows I once enjoyed very much.

It also annoys my wife, as when we’re watching a movie or show at home I might say, “Well, this plan of his is never going to work, because at this point in the story he should be hitting his big reversal of fortunes right before that point where all seems lost. Then I bet he’ll have the climax of his internal arc, realizing that what he thought he wanted all along was really not what he actually needed. That realization should move him toward the action plot climax where he’ll—” At that point, or some time before, she’ll usually shut me up.

I loved the sense of unity and community we had at VC. I felt like part of a family and loved supporting my fellow students and thence alumni in their writing endeavors. We used to have this great online forum where we all talked about all sorts of book and writing relating stuff. The thing had its own jokes and internal mythology. And then, twice a year that great online forum would go silent when we all got together in person.

That unity, the common sense of purpose among a group of people sharing a dream, that’s what I loved. 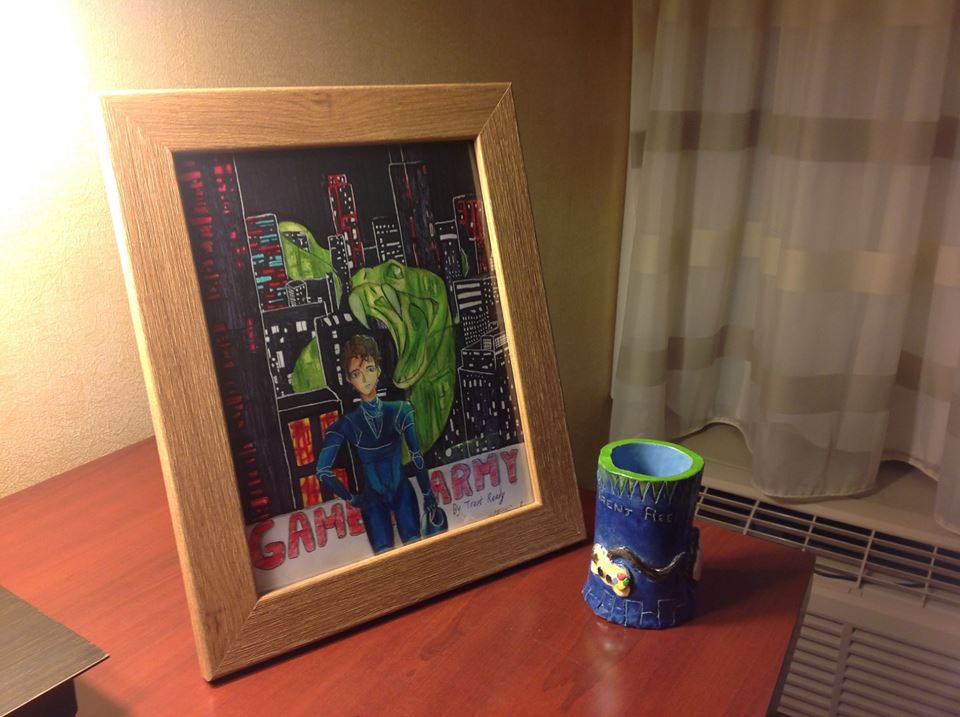 When I first arrived at VC, I was in awe of the talent and honed writing skill in the students all around me. I never abandoned that sense of amazement and eventually learned to cherish it, but when I was very new at VC I felt out of place among all those great writers. I wrote to Katherine Paterson about this, as she is one of the smartest people I have ever known. “I’m not sure I belong among these people,” I told her. “I want to say to them, ‘I’m nobody. Who are you?’” Katherine, as usual, responded in the most perfect way. “I’m nobody too,” she said. “If I ever forget that, I’ll be in big trouble.”

Later, I expressed doubt in my attempt to write the manuscript that would eventually become my first novel, a story told from the point of view of a thirteen-year-old Afghan girl. “Do you think a guy like me has any chance to write a book like that?” I asked. She looked at me very seriously, “I think you should try.”

To that new or prospective VC student, full of dreams but plagued by doubts, I would tell these stories and say, “Come join us. You belong at VCFA. Never stop trying. You can make that Dream happen.”

What do you wish you had known before you first set foot on the VCFA campus?

In a lot of ways I am grateful for my journey from ignorance to some experience, or at least to less ignorance. I learned many of the things that I know about writing through spectacular failures, after all. But I wished I would known enough to push myself even harder, to be able not only to produce the well developed manuscript that eventually became my first novel, but also another manuscript or two. I found myself unprepared, as my first novel approached publication, when my publisher asked, “What else do you have?” I went into VC with an idea of getting a novel close to publication. I wish I would have been thinking beyond that first book. But, of course, that is a tough order for a guy who seriously doubted he’d ever publish a book.

Oh how hard we’d all push our past selves if we could.

Thank you, Trent! Readers, please visit Trent at his website to find out about his other works and learn more about Gamer Army.

The Lotus & The Pen #1: An Interview with Mary Quattlebaum – Heather...
Scroll to top