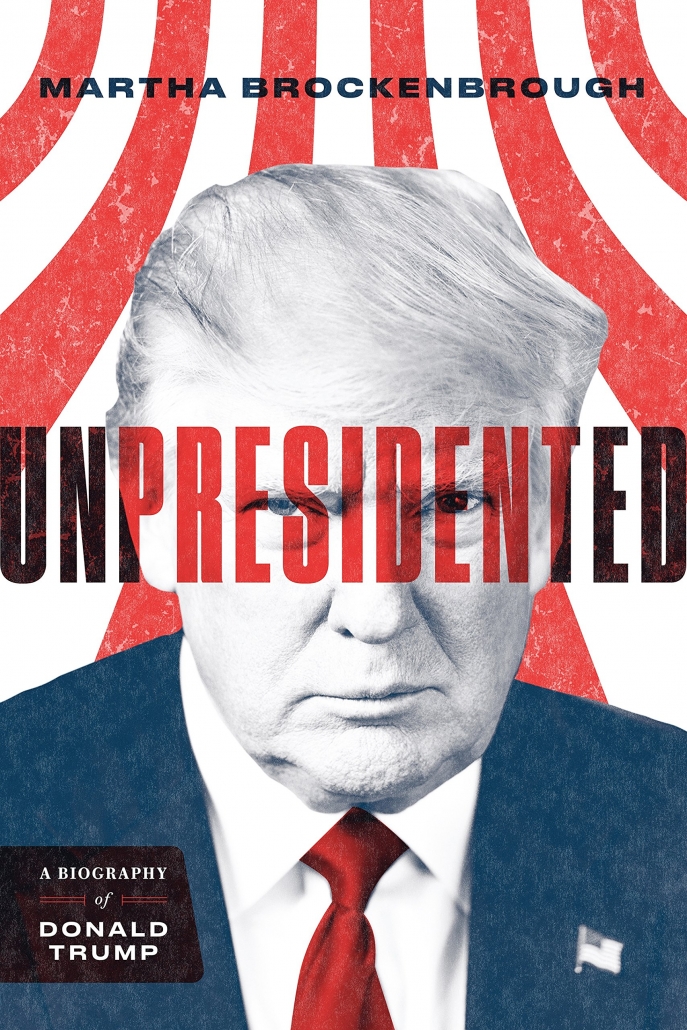 Today we celebrate the release of VCFA WCYA Faculty Martha Brockenbrough’s YA biography of Donald Trump, Unpresidented. The book is a hard-hitting account of Trump’s life, the 2016 USA election in which he ran against Hillary Clinton, and even the lives of Trump’s father and grandfather.

A riveting, meticulously researched, and provocative biography of Donald J. Trump from the author of Alexander Hamilton, Revolutionary.

Born into a family of privilege and wealth, he was sent to military school at the age of 13. After an unremarkable academic career, he joined the family business in real estate and built his fortune. His personal brand: sex, money and power. From no-holds-barred reality TV star to unlikely candidate, Donald J. Trump rose to the highest political office: President of the United States of America.

Unpresidented is available now from Macmillan. We asked Martha a few questions about the nonfiction writing process as well as teaching at VCFA in the Writing for Children and Young Adults program.

Thank you for joining us, Martha!

Nonfiction isn’t a popular choice among students at VCFA, but it’s a growing and important part of kidlit. What’s the appeal for you? Do you encourage your students to try it?

When I was a kid, I read voraciously, and although I didn’t really think much about whether I was reading fiction or nonfiction, some of the things I’ve most remembered are nonfiction works. Specifically, The Diary of Anne Frank, which is every bit as gripping as fiction, and all the more resonant because it was a true story. And I did go through a phase as a writer where I considered fiction, and particularly literary fiction, to be “the best,” but I’ve moved past that now. As a reader, I remain voracious, and nonfiction books give me at least as much delight as the fiction I read. It feeds my writing and my humanity. As a writer, you can take from nonfiction with impunity. You can’t take from the fiction that you read. So, if you’re at all greedy, as I am, you will start to read more nonfiction. Your writing will be enriched as you deepen your understanding of the world.

I definitely encourage my students to try writing it, and I support them in their efforts. And while we are not a program that focuses at all on publishing as a business, I can say that for two semesters in a row, I’ve worked with students on nonfiction picture books. Both of those students produced work that was agent-ready. Both signed with agents, and one has already sold her manuscript. It is exceptionally difficult to write an outstanding nonfiction picture book, but it’s also easier to write something that feels fresh and original in this category, which is already chockablock with books about bedtime, tooth fairies, and beneath-the-bed monsters.

At our next residency, I will be hosting a couple of nonfiction lunches for students eager to talk more about it. As my work attests, you can write both fiction and nonfiction—and my own feeling is that you can be a stronger writer with a solid understanding of both. 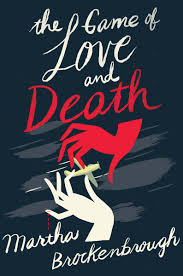 Unpresidented and The Game of Love and Death have more in common than you might imagine. Both were books I had to write. The Game of Love and Death was my book about love (is love is love), as well as the meaning that death gives to life. As a human being, I wanted to say these things before I died. Unpresidented felt even more urgent (and the production schedule reflected it). This book, I had to write because I wanted young readers to know the truth about the president. When I woke up the day after he was elected, aware of the disturbing statements and behavior on the campaign trail, I felt a cold sweat thinking about the books that would be written. The ones that shined him up and sanitized him because that’s what adults often do for children. I also feared books that would normalize him, and the one thing democracy cannot withstand is the normalization of habitual deception. It’s not “normal.” All politicians do not lie like the president does.

And so that’s where both books started… with an urgent desire to say something important to young readers.

And I feel like I should say that neither book immediately found a home in publishing. This was discouraging, to say the least. But I stuck with Game for three years. I stuck with the idea of the Trump book and its importance for the first full year of his presidency. And around the anniversary of his inauguration, while I was crossing the bridge in Montpelier with my colleague Liz Garton Scanlon, the offer came in. At the next residency, I was already working on copy edits—even though I had not yet written the book’s ending, and did not know what it would be until two days after residency finished, and I had only three weeks to turn in the final manuscript.

All of this is to say: Write what you must. Write without a net. Be bold, and you will find resources within yourself that did not exist until you wrote them into being with the strength of your faith and desire. 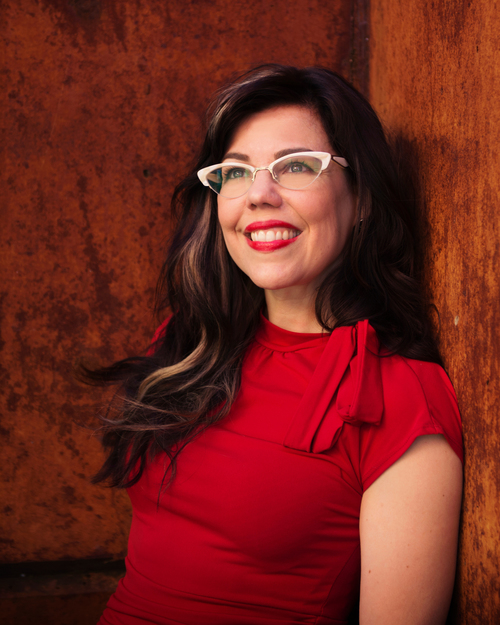 Reading through the sample, the narrative when from Donald Trump in the present day to the story of how his grandfather came to America from Germany. Does the whole book go back and forth through time, or is it mostly chronological? And how did you make the choice to write it that way?

The book does start at that pivotal moment just before election day, when everyone thought Donald Trump’s “pussy” tape would end his campaign. Then it goes back in time and proceeds chronologically. I think we can best understand history if it’s told to us chronologically rather than thematically. But I also wanted readers to know that much of this story would be set in the urgent present. There was reason to go back to his grandfather’s immigration. His grandfather lost his German citizenship for draft dodging, and wrote a heartfelt letter to a prince talking about how difficult deportation was for a family. Trump made immigration one of his themes during his election (and indeed, his tweets about immigration were his most popular—so he knew he’d hit a vein). His own family is made of immigrants, and so it felt like important information to include, along with the genesis of his family’s wealth.

At this point it seems like nothing we learn about Donald Trump could shock or surprise us, but… did you find out anything surprising during your research?

I was probably most surprised when an interviewer in 1980 asked him what he’d do if he lost all of his money. Somewhat jokingly, he said he’d probably run for president. But, as we learned from Dean Gloster’s critical thesis on humor, there are no “jokes.” He has long been ambitious. He’s also been unsuccessful as a businessman, filing Chapter 11 more times than any other business his size in the last thirty years. His record in real estate development is below average. Had he simply invested the vast fortune he inherited from his father, he would be far richer. In other words: he is a businessman whose efforts have lost him money. What’s more—and this is what remains to be seen pending the Mueller investigation—it is in no way unreasonable to suspect the Trump Organization has engaged in money laundering.

Before I did this book, I really did believe he was a regular businessman with a knack for getting the spotlight.

Now, I know that he’s nothing of the sort. Trump University was a fraud. He regularly didn’t pay his contractors, or he’d give himself huge discounts after the fact, something that smaller businesses did not have the wherewithal to fight. He partnered with criminals and people with questionable ties to the Kremlin for years (denying it under oath).

We are in dangerous waters, and what remains surprising to me is how many people are willing to overlook this for a variety of reasons. The process answered the questions I had as a child reading Anne Frank’s story: Why did people become Nazis? And would I have become one?

How has teaching at VCFA affected your writing life?

It’s made it better in so many ways. There is the great privilege of residencies, where I hear lectures by my colleagues and by students. (That was perhaps my biggest surprise: How terrific the graduate lectures are.) And when you are working with a student, doing everything you can to help them reach that next level, the deep thinking about the work helps me see my own work better.

There is also the community aspect of it. VCFA has given me a whole new community to admire, love, and support. What an extraordinary way for me to get to spend my life.

Which is better—Summer or Winter residency?

Winter. There’s nothing so beautiful as sitting inside a workshop room in beautiful old College Hall and watching snow tumble out of the sky.

What advice would you give to a prospective VCFA student or teacher?

Embrace the work. It is so much work to do this well, but in dropping our resistance, in lowering our shields, we are all transformed.

Multi-talented Martha Brockenbrough draws on her diverse experience in journalism, research, nonfiction, and literary teen fiction for this incisive and thoroughly researched biography of sitting president Donald J. Trump. A powerful storyteller and narrative voice, Martha is the author of Alexander Hamilton, Revolutionary; The Game of Love and Death; and Devine Intervention. She lives in Seattle, Washington.

Mindfulness Monday: How A Light Bringer Lights Her Own Fire – Heather...