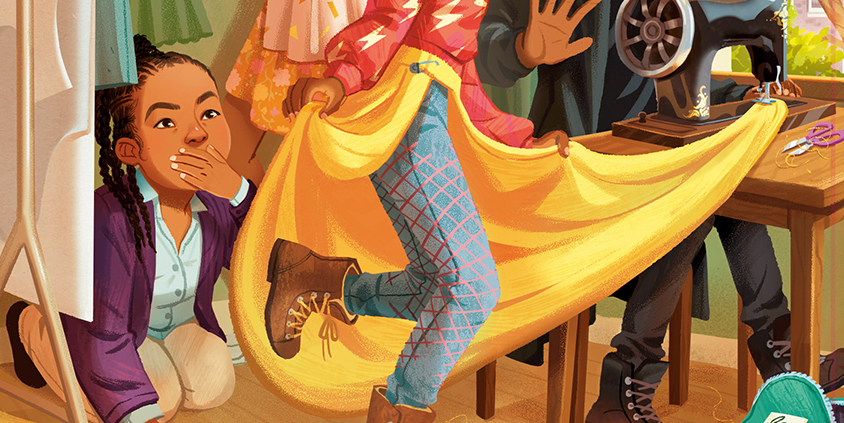 Art cannot exist in a vacuum. This we understand completely at VCFA. Each form of art influences and is influenced by the other art forms, creating the web that connects The Arts (big A.) It’s no surprise, then, that VCFA WCYA alum Lakita Wilson explores and celebrates a separate art (the art of fashion design) in her upcoming middle grade novel, Be Real Macy Weaver, which will be released on July 12, 2022 from Penguin Random House. We got to interview her about writing, fashion as an art form, and capturing the longing for friendship and understanding that is part of the experience of childhood.

1. Tell us about Be Real, Macy Weaver in your own words.
Be Real, Macy Weaver is a novel about a girl who wants more. More love. More acceptance. More support. More friends. But, she’s going to have to discover who she is, what she likes, and what’s best for her to get it.

2. Tell us about your main character. What parts of you or others did she come from? What about her makes you proud?
There are definite similarities between Macy and me as a kid. I desperately wanted to be seen, and I definitely did the most at times. I didn’t always have friends, and I wasn’t always the best at being a friend. But I made it through, and I knew Macy would too, if she just kept going, owned up to her part in the mess, and worked toward better. Roadblocks and disappointments are hurled at us every day. The only thing anyone can do—child or adult— is work to get to a better place the best way they know how.

3. Fashion is a big part of this book. What drew you to fashion and did you have to learn anything new about fashion before writing this book?
I am obsessed with fashion—fashion can be a tool for expressing individuality, or your community as a collective. When I wear a unique piece, I am telling you who I am. When I wear something that symbolizes my collective group—whether it has cultural significance, school gear, or even something that is generation-specific, I am telling you who we are. I think when chosen with care, your wardrobe has the power to say so much without you ever having to speak. I’ve always loved browsing through fashion magazines and looking at what is coming down the runway (even though I could rarely afford the pieces.) Studying fashion, and Haute Couture specifically for this book, forced me to see fashion design as a true art form. The same way I try to give my readers a story, fashion designers tell an entire story in one collection. And I love looking at fashion in that way. What is the story coming down this runway? What does the designer want me to know about what they created? 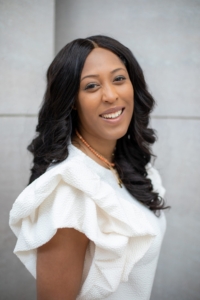 4. What do you think are some of the things children struggle with when it comes to learning to be their true selves?
Being yourself is so hard when you’re young, because in the short term, it’s so much easier to blend in, and become acceptable by peer and societal standards. But the long term havoc this does to your heart and self-esteem isn’t worth it. So, it’s definitely a struggle, and a social risk to showcase what makes you unique . However, I will say that this generation feels a lot braver than my own. This generation embraces and celebrates uniqueness a lot more. And I find that so refreshing. Maybe our generation saw the emotional damage of masking ourselves to fit in and taught our children better. Or maybe the children today are just smarter.

5. Trying to find a best friend–not just any friend, but a BEST friend–is a theme that shows up often in middle grade. Why do you think the yearning for best friendship is such a big theme for that age group?
I teach early childhood education at a college here in Maryland, and one of the things I teach my students is about the progression of play and friendship—and what that looks like in a child’s development. Children move from parallel play (playing side by side, but not necessarily together), to playing together in preschool, and actually choosing their own friends, instead of selecting friendship based on convenience and proximity. By the time children reach the 8-12 age range, they understand the value of friendship, and how it can really be an asset for the heart. So, the next natural stage of development for them is choosing the best or the favorite. Who am I closest to? Who do I feel comfortable sharing my deepest secrets. Who gets me the most? They are also beginning to think critically about these friendships. “This person is my friend, but they make me feel horrible inside all the time. Is this really my friend? Do friends treat each other this way?” Friendship is a popular theme, because it’s one of the first times children get to make their own choices about what’s happening in their lives and are forced to trust themselves. The best decisions aren’t always made in this stage, but it’s a necessary part of our development so that we can look back on our missteps or mistakes, and choose better next time. I could write ten more books around the friendship/best friendship theme because there’s always something friendship-related going on with this age group.

6. What was the most surprising thing you learned (about fashion, about your characters, or about yourself) while writing this book?
I loved the fact that the original designers of Haute Couture clothing were literally painting designs that had symbolic meaning onto the fabric. The fact that a designer could make this very unique piece, and it be something that can’t be duplicated is priceless. I realized as I studied that, that we had teens in my high school who did the same thing. They would airbrush clothing and sell them, and we called it urban wear. But honestly, they weren’t mass producing it (at least not the ones who were creating stuff in their bedrooms.), they were creating unique pieces to wear themselves or sell off to a classmate. So, technically, they was this renaissance of Haute Couture Urban Wear going on right in my high school, and we all treated it like it was no big deal. Those guys deserve their flowers for having the guts to create on that level!

7. What was something you learned at VCFA that helped you write this book?
When I started VCFA, I had one novel drafted, and I thought I would fix this novel at school, and graduate ready to publish that one work. VCFA turned my “one and done” idea on its head as soon as I arrived. My advisors and the school in general encouraged me to write widely and take risks—to free myself to be as creative as possible while I was there. I shelved the original novel halfway through the program, and started MACY on a blanket in the grass during my third semester residency. I had just attended Evan Griffith’s grad lecture:
Give the Hero a Pet: How Animals Can Reveal and Deepen Human Characterization and I was determined to put what I’d just learned on the page. So, I created this spider as Macy’s friend/pet. And it’s the only thing from those first typed lines in the grass that remained in the final copy of the novel. Thinking about it, I should’ve named that spider Evan. Missed opportunity, lol!
Also, I had a lot of inspiration behind using fashion as a form of expression by just going to residency. I mean, have you seen Ann Cardinal and her uniquely amazing eyeglasses? She’s basically a fashion icon. Will Alexander, and the way he’s used his cane as the greatest style accessory to hit College Hall’s Chapel? Put him on the cover of GQ immediately. I respect someone who goes out of their way to showcase their individuality. I recently saw Amy King on the cover of School Library Journal in her trademark ripped jeans, and the joy it brought me is unexplainable. Because, Amy brought herself to that cover. It’s brave and fun to see. 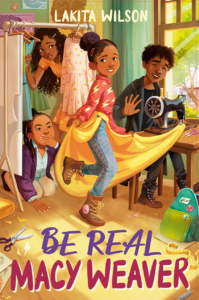 8. What was the most challenging part of writing Be Real, Macy Weaver?
The most challenging part of writing BE REAL, MACY WEAVER was finding the emotional foundation that ultimately led to many of her choices. Macy needed so much character development at first. For so long, when I would write scenes in novels, I would include a lot of action. Things were always happening. And I could make something humorous. But, I never looked inside my main character’s heart, and I believe this is what made it so hard to get an agent at first. I would always get feedback from agents saying, “This is fun concept, but it lacks emotional resonance.” One time I got this same feedback three times in one week from agents who had rejected me, so I knew I had to work on elevating my craft. For BE REAL, MACY WEAVER, I had to sit down, and really think about how I’ve felt in similar situations, or how I might feel in the situations my characters were in. Then I started rebuilding my characters from the inside out. This is when I really got to know Macy and her friends.

9. You’re also writing a young adult book. What was the most stark difference for you in writing YA and writing MG?
I am very childlike at heart, so middle grade is naturally easier for me to write. I remember my childhood angst very well. I remember the feelings of not belonging, of being too much, of not being enough. YA is completely different for me. I spent so much of my teen years, expertly pretending not to care, that it’s harder to remember how I truly felt during those years—making it harder to put those feelings on the page. You also have to be so much more romantic in YA and for a person who would rather tell a fart joke than say “I love you”, this is extremely hard. However, longing for more/better for yourself is a theme that has no age limit, so regardless of MG or YA, I always start there.

10. Do you have any advice for other middle grade authors?
Find your inner child, and spend lots of time getting to know them again. Technology changes throughout the years, but wants, needs, hopes and dreams don’t. They find their way into children’s hearts throughout the generations. You may have written a pen pal using a letter and snail mail. Your children may leave comments under a friends post on social media. Both of you still want(ed) the same thing. A connection. A friend. To find someone that gets you. Write from your inner child, and you will find readers that can relate to your story.

Lakita Wilson is the author of several novels and non-fiction projects for children and young adults, including What Is Black Lives Matter?, a part of the New York Times Bestselling HQ Now series; Be Real, Macy Weaver, a coming of age middle grade friendship story; and a few other secret projects she isn’t allowed to tell you about yet.

You can learn more about her and her books at www.lakitawilson.com

Cinderelliot: An Interview with Alumnx Rachel Smoka-Richardson
Scroll to top